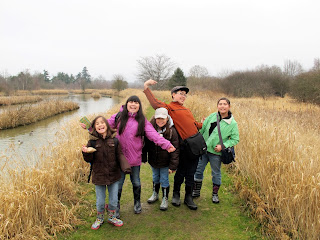 I've reactivated my old blog - I pulled it to private the beginning of 2007 when Allan and I separated and divorced. I had several draft posts later trying to explain things - but decided to keep it all off the internet.  Life has moved on and the M's are doing amazingly well these days and so much bigger than when I was last posting! I've turned the blog public again, mostly for their sakes: for them to read the stories of when they were little.
Melissa is in grade 8 and getting straight A's, she's an artist and a writer with a strong creative streak.   Her current project is making an iMovie cooking show in French as a French class project. She has a very spoiled pet cat - Sammy - who we have had since 2007.
Michael towers over me at this point, he's in Grade 7, an honor roll student, plays clarinet, badminton and current hobby is making his own minecraft videos and sharing on YouTube! Michael also keeps hamsters and his current hamster midnight is his 6th hamster.
Madeleine is in Grade 6 and an avid reader and into crafts and art. She's also very girly and does nails and hair for herself and her sisters. Madeline has been taking swimming lessons and played badminton on the school team this year.
Megan and Maribeth are in grade 3 in separate classrooms this year. They love squirrels and birds and have a backyard squirrel and bird feeder they keep filled up! They want an indoor pet squirrel, but that is not going to happen!  Both girls have been in swimming lessons and gymnastics this year and recently did a gymnastics routine in the school talent show.
I'm now 37 years old,  have been single parenting since Jan 2007.  I'm currently dating a wonderful man for over a year now and working part time as a Lunch Lady making and delivering hot lunches to schools. I'm hoping to get back into  office work in the near future.  I ended up dropping out of school when my marriage fell apart and I had to work right away - so never did finish my business administration degree and it is now well past the 10 year window to upgrade from the 2 year to the 4 year program.  I also stay busy playing cello with the Worship Team at church and helping lead a church small group studying "The Truth Project".
I'm not yet sure if I'll keep writing on here yet but thought it best to do a bit of an update post when this blog reappeared!
﻿

Change is Constant - an Update on Life with the M's

Where to begin and where to end? Once again life twists and turns and puts us where we didn't expect to be. This time last year, I was home schooling Melissa and Michael with every intention of doing so for years to come. I was dealing with gall bladder attacks and had not yet even contemplating returning to school myself. This year I'm in school, the kids are in school, and other than a twin-inflicted cold, my health is the best it has been in a number of years: physically and mentally - I would say that until I started getting better, I didn't know how bad off I was for so long.

The big news here is that we are buying a condo! The subjects are removed; the deposit paid and it is closing the end of February. The chain of events that have transpired over the past year seem to be leading somewhere; somewhere there is a reason for all of this: kids in school, me in school, buying a condo, having a mortgage. Every time I think I know where life is going to put me; things change, the road turns, and I end up somewhere else. There is a bit of stomach turning terror at going into so much debt: I think I've lost 5 pounds just in the process so far. 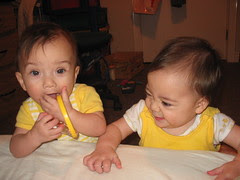 Melissa, Michael, and Maddy had their 1st report cards and parent teacher conferences of the year. Maddy and Melissa are both completely on track for their age and grade levels. In short, they're doing well and their teachers love having them in their classrooms. Michael is advanced in everything and is in advanced spelling, reading, and math. He also is helping other 1st graders as well as being sent in to read to the Kindergarten class. Michael is also "extremely popular" at school. Given that he grew up with all girls, that kind of surprised me. I guess that was wasted worry on whether or not he would get along ok with other boys.

I finished up my first semester back to school in almost a decade with a 4.0 GPA. I got A's in both my English and Political Science classes. I 'm thrilled with that and also enjoying the time off between semesters. I have proved that my brain is not dead or turned to mush. I'm also loving seeing the kids. Having both them and me going to school has improved our family dynamics amazingly. We all have things to talk about and when we have a break from school we appreciate spending time with each other, instead of just getting on each other's nerves. Of course maybe the thousands of dollars Allan and I dropped into personal and marriage counselling this year may be helping with some of that as well.

There is more. There has been so much more, I just can't remember it all. 2006 has been an interesting year that ranged from wonderful times to some of the most stressful things we have been through; things we almost didn't make it through. At the end of all the twists and turns 2006 threw at us, we are not where we thought we would be. It will be interesting to see what happens next year in 2007. I'm getting the chills now because when I went to type 2007, I typed 1997 and then again. 1997 was a year for me of very hard change and transitions. I hope that is not a sign of things to come...
Posted by Cheryl at 12:08 a.m. 2 comments: 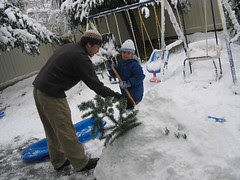 The kids had their first snow day yesterday after a storm dumped 29-53 cm of snow over the lower mainland over the weekend and through Monday morning. 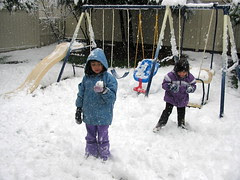 Uncle Alvin stuck around for the snow day and helped Michael build a big snowman/jabba-the-snow-hutt in the back yard complete with carrot nose. Uncle Alvin also helped the kids build a snow jump for the sleds and a "snow mountain" in the front yard and the kids pestered both of us for endless rides around the yard on the sleds. 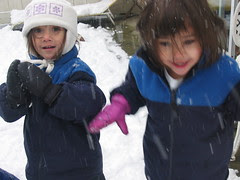 The surprise of the snowstorm was that the twins LOVE playing outside in the snow - they got into the action with snowball rights, sled rides and even their summer beach toys.

Maddy and Melissa enjoyed playing outside as well - but they decided not to go out again in the afternoon - but to stay curled up with books in the living room in front of the TV. Melissa is currently reading through the Chronicles of Narnia on her OWN!

Besides playing outside - the kids got to enjoy the traditional "snow day" activities:plenty of hot chocolate, fresh chocoloate chip cookies, movies to watch, and even making Christmas oranments and pictures using copious amounts of glitter. For the first time ever, Melissa was sad to have to go to school this morning.
Posted by Cheryl at 2:48 p.m. 4 comments: 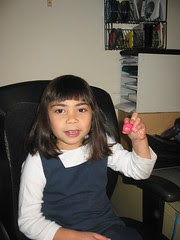 She's never had bangs, her hair goes so nicely to one side on its own, but she ASKED me to give her bangs while I was trimming Maddy's. I gave it my best shot, but well, they still need some work, not very even. She's happy though. I think that with this cut our Miss. Melissa Jean looks a bit like my cousin Jeanne. 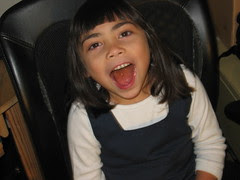 All in the Family

Other blogs we read